Paul McCartney looks so freakin' cool on this album's cover, bare feet and cigarette worn with pride. Can we all agree that McCartney was the cool one and still is? Thanks.

I don't like Abbey Road as much as Revolver. I don't know why, but it just doesn't catch me as easily. Great songs, and lots of variety, like Sgt. Pepper, but...I dunno. One thing I'm not a fan of is how many different covers of "Come Together" I've heard over the years. It's a neat song, but when so many people cover it and can do nothing more interesting with it than has already been done, why bother? I guess it's a testament to the impact the song has had on these artists, but some songs should be left alone.

Welcome to the world of GoLion! There is no Galaxy Alliance, sending space explorers to help a war-torn Arus and Princess Allura. (Ugh! "Allura"?!) In fact, in GoLion, Earth has been destroyed by nuclear war, and the Galra empire has moved in to claim whatever they can salvage. Our heroes have just returned to Earth from a mission in space to find it decimated. They may be the last survivors!

Emperor Daibazaal is ruthless and power hungry, and apparently has a thing for Heavy Metal iconography. Just like in Voltron, the antagonists have skull-headed ships and thrones and armor, like something out of an Iron Maiden video. There is no question as to who the "bad guys" are. It's the dude with a giant demon skull on his fuselage! Obviously.

In America, this motif was apparently not enough, so we renamed planet Galra to Planet Doom, changed Daibazaal to Zarkon, and his creepy son Sincline to Lotor. I'll get to Sincline later, but suffice to say...the kid's got issues!

So, quick recap of the first four episodes. Five earthlings return to wasteland Earth and are captured by a Galra slaveship and taken to planet Galra. They will be forced to fight for sport (it is suggested they have already survived one encounter of that kind) and/or served as stew for the gladiatorial Deathblack Beastmen. That's right! Voltron's Robeasts are GoLion's Deathblack Beastmen. METAAAALLL!!! We get to see other helpless aliens get mauled by these freaks, and the blood and gore fly with vigor.

The five hot-blooded heroes decide to escape by riding giant Space Vultures down from their prison tower and hijacking a slaveship. This goes less than smoothly, and they are shot down, crashing on Planet Altea. They make their way to a bombed out castle, where the statue of a lion stands guard and seems to be roaring. Inside, they meet Raible and 16-year old Princess Fala, who tell these strangers they are the saviors of Altea. The jokers buy it, and put on colored tights that Raible gives them. That's Raible, the old guy who's been protecting Fala since Galra attacked their planet 15 years ago. Raible, the guy with the mustache. Colored tights.

Anyway, the ghost of King Raimon (Not to be confused with the Ramen King), deceased father of Fala, gives the five dudes his undead blessing, and they deploy four of the lions, since one of the keys kept in King Raimon's casket is missing. The ghost doesn't bother to tell them where it is or who took it, although you might think he'd know, since he seems pretty cognizant and addresses people when they walk into his crypt. However, logic has nothing to do with GoLion!

About this GoLion. Not a weapon built by King Raimon at all, but an ancient sentient robot warrior that became arrogant with his sword skills and challenged the GODDESS OF THE UNIVERSE to a duel. She was having none of it, so she separated him into five lions and sent him hurtling to Altea, where he became their deity of protection. Now, when she separated him, I guess she also built cockpits and keys so puny humans could climb in and control him, even though there is no indication that before separation he ever had a pilot. Oh, Japan...

Also, about his name. In Japanese, the word for "five" is "go". So, GoLion means "Five-Lion", but the double meaning of "Go" as an action is not lost on the creators. Thus, when forming the singular giant robot, the team yells in unison "Let's Go Lion!" in suitable engrish. Outstanding! It might be helpful to know that Speed Racer was called "Mach GoGoGo" in Japan, and of course the car was the Mach 5. So, there you "go".

Daibazaal's witch Honerva sends a Deathblack Beastman to Altea in a space coffin ship (WAILING GUITAR!) who summarily dispatches the four lions with ease. After a "scary" moment where you might believe that four of our heroes have perished...TA-DA! They're OK, and regroup to find the missing key so they can form GoLion properly, since, you know, that makes sense.

Turns out, the SPACE MICE have the key. Yes, the SPACE MICE, sentient mice who can speak in word balloons, which only Fala can understand properly, since they entertained her as a lonely, parentless child. How did they entertain her? By putting on Broadway shows in her bedroom, that's how! Complete with little dresses and an orchestra. How did Raimon miss these guys taking that key again?

So, key recovered, but Raible is reticent to send them out without training, because they won't know how to form GoLion, and doing it wrong might kill them. Well, they convince him that they don't value their lives (essentially) so he and Fala give them the thumbs up to throw them away.(essentially)

Turns out, no training necessary! Just yell out your intentions, and anyone can pilot a giant sentient magically powered ancient alien robot unless the plot calls for piloting complications. Which I'm sure it will.

Remember the old adage "a chain is only as strong as it's weakest link"? Well, it doesn't apply to GoLion, because while the lions get the crap kicked out of them seperately, and the pilots seem to suffer much trauma as they tumble over the terrain, once GoLion is formed, they're invincible. AND, gravity stops working. And physics. Like, how do these guys not get plastered all over their cockpits every time GoLion swings his arm of kicks the enemy? "Who Cares" is the right answer.

Training Shmaining. Our heroes bring the beatdown to the hideous Deathblack Beastman (I love saying that!) and deliver the final blow: King's Sword Jyuoken! AKA, the Blazing Sword! Gotta love the slashing sounds of metal through flesh!

Day saved! Until next time... 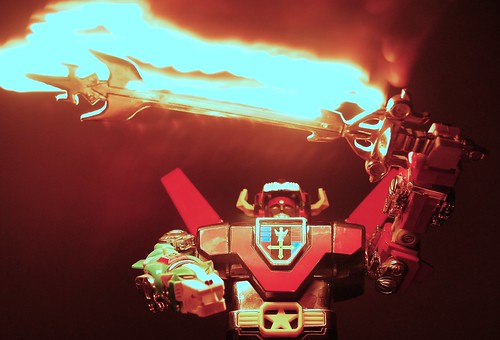 So, it took four episodes before GoLion was seen properly. That's kinda cool, and the anticipation is well developed. I joke, but the show is fun and pretty entertaining. Once GoLion is revealed, you know Galra is in for a world of much deserved hurt. I am just amazed by the ever-shifting tone these Japanese shows exhibit. Within breaths there is carnage, then heroic speeches, then raging angst, then dancing space mice. Ridiculous, but enthralling. Only 48 more episodes to go!


Golion Episodes:
1. Escape from Slave Castle
2. The Ruined Phantom Planet
3. A Ghost and the Five Keys
4. Resurrection of the Legendary Giant

To be continued...
Collapse